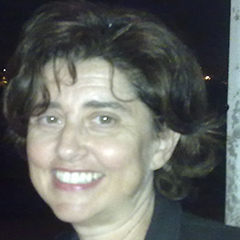 Nunziatella Alessandrini is an integrated researcher at CHAM (Humanities Center), an R&D Unit of the Faculty of Social Sciences and Humanities (Faculdade de Ciências Sociais e Humanas) of the Universidade NOVA in Lisbon (NOVA FCSH). She obtained her Master degree and PhD in Modern History at the Aberta University of Lisbon. Her research interests are focused on the Italian presence in Lisbon and the Portuguese Empire, mainly Asia and Brazil, in the sixteenth and seventeenth centuries. The researcher looks more particularly into family history, tracking its socioeconomic route, namely detecting relations with the Portuguese nobility, as well as economic and cultural networks of Italian merchants in Lisbon, and in the space of the Portuguese empire, in the 16th and 17th centuries. Organized, on behalf of the Italian Cultural Institute in Lisbon, 9 cycles of conferences (2011-2019), concerning relations between Portugal and Italy during the Modern Age. These conferences were promoted in order to acknowledge and disseminate recent research and, simultaneously, foster new paths and networks of investigation. The main goal lies on the study of artistic, commercial, economic relations and policies between Portugal and Italy during the Medieval and Early Modern periods, having as starting point, the Italian community based in Portugal in the sixteenth and seventeenth centuries. Coordinator of the Research Group "Economies, Societies and Mercantile Cultures" in which studies rely upon History of Portuguese expansion, foreign communities and flows of migration; phenomena miscegenation; social groups, economic and social history, trade.