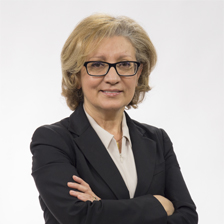 Ana Maria Martinho works at FCSH - Universidade Nova de Lisboa since 1989. From 2007-2010 she was at UCBerkeley, where she undertook interdepartmental activities, bridging links between Africa and the Portuguese-speaking world. She spent a sabbatical at SOAS, London University, in 2011, strengthening her institutional links with Lusophone Africa. She is also a visiting faculty member at other universities, notably in Angola, Cabo Verde, and Moçambique.
She earned her Agregação in 2006, and her doctoral degree, in 1998, both at UNL.
Ana Maria Martinho has won awards and fellowships from the Hellman Family Faculty Fund, the Instituto Camões, Fundação Luso-Americana para o Desenvolvimento, the European Union, and the Science Ministry in Portugal.
She has supervised graduate students across the world (including in the United States, Angola, Portugal, Cabo Verde and Moçambique). A number of her students have attained positions in academia and politics.
Having been involved in over sixty international missions, she visited multiple times all five Lusophone African countries. She also has established academic links with Brazil, South Africa, Argentina, Venezuela, Botswana, Canada, the US, having lectured extensively in many of these locations.
She serves on the editorial board of 4 international academic publications. Since 1990, she has authored 82 publications.