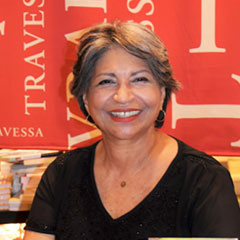 Isabel Lustosa (Isabel Idelzuite Lustosa da Costa) has a degree in Social Sciences from the Universidade Federal do Rio de Janeiro - UFRJ (1981), a master's degree (1991) and a doctorate in Political Science (1997) from the former Instituto Universitário de Pesquisas do Rio de Janeiro (current IESP / UERJ), under the guidance of José Murilo de Carvalho. Partner of the Instituto Histórico e Geográfico Brasileiro – IHGB and member of the Pen Club do Brasil, she was, for more than thirty years, full researcher at the Research Center of the Fundação Casa de Rui Barbosa, having previously worked at the Museu da Republica and at the Instituto do Patrimônio Histórico e Artístico Nacional (IPHAN). She is a specialist in Brazilian political and cultural history with a focus on studies on the press, a subject on which she has been speaking, publishing books, articles and organizing seminars, in addition to leading, alongside Tania de Luca, a research group registered with CNPq, since 2016. Her master's dissertation, defended in 1991, is a precursor study of humor in Brazil in the early twentieth century and paved the way for the investigations of other authors who followed, having established an interesting contrast between the humor of literary bohemia and the aesthetic appropriation of humor by Modernism. From the beginning of her academic life to today she has accumulated a vast production of studies on Brazilian caricature in the 19th and 20th centuries. In the researches that were the basis of his doctoral thesis, the fundamental role of the press in the Independence process and how it was then constituted in a public sphere that gave rise to embryonic and unpredictable forms of political competition. She published, in the Brazilian press, for about twenty-five years, reviews of some of the main books in the areas of History and Social Sciences and the like, constituting, through this activity, a great deal of knowledge about the state of the art in those areas. She held the Simon Bolívar Chair (IHEAL) at the Université Sorbonne Nouvelle-Paris 3, in France (2010/2011). She held the Chair Sergio Buarque de Holanda / Maison des Sciences de l´Homme / Paris for the period 2012-2015, serving as visiting professor at the University of Rennes-2. During 2020, she was in Lisbon, conducting research at CHAM, from Universidade Nova, with a CAPES scholarship in the category of senior visitor.