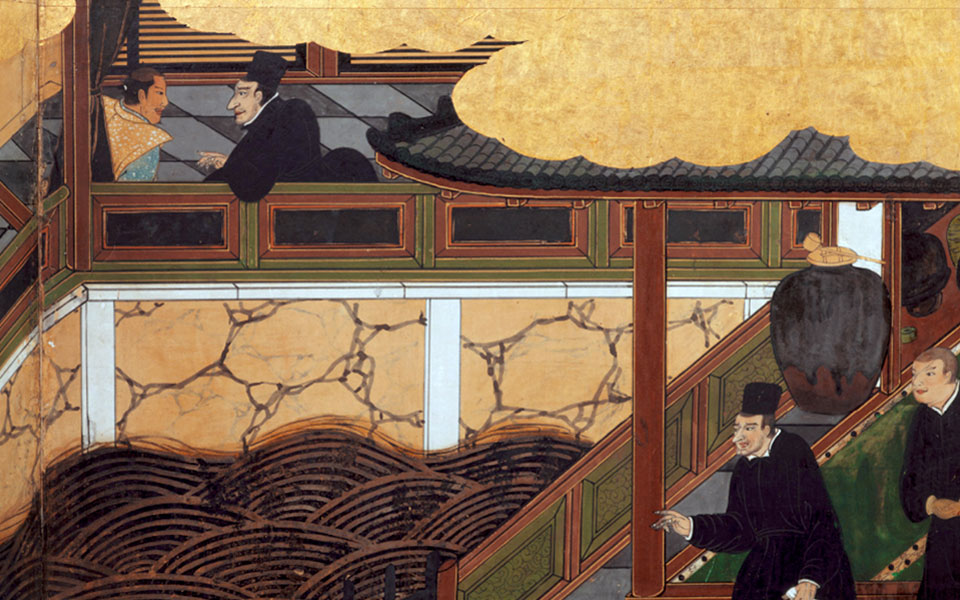 The Portuguese expansion in Asia in the early modern period heralded a new age of cultural interactions among several civilizations. Relations between religions, strategies of interpretation and accommodation are the main fields in which intercultural contacts can be observed. In Japan, the arrival of European traders, mercenaries and above all, well-trained members of religious orders prompted a wave of debate, studies and controversies between Buddhist monks and their Western counterparts. At this regard, Jesuits played a major role in this global enterprise and, contrary to their policies in China, in Japan started to interact with the composite Buddhist clergies and the political elite. The chosen chronology (c.1549 – c.1647) corresponds to the period of the Portuguese presence in Japan and to the process of unification of the territory by the Japanese military elite. This period was crucial in terms of religious affiliation, as it coincides with rival interactions between Buddhist sects and practices and the action of the Jesuits, active in Japan since 1549. In spite of the final edit of expulsion of the religious orders (1614) and the Christian martyrdoms and persecutions, their presence lasted until the expulsion of the Portuguese in 1639 and the last unfruitful attempt to re-establish diplomatic contact (1647).

In terms of philosophical conceptions, as well as of the representation of divinities and “forces”, Buddhism in Japan had acquired its own specific forms, including the emergence of “sects” and schools that had developed sets of beliefs and practices over the years.

It was precisely with some of these schools that the missionaries working under the Portuguese Padroado set up acquaintances and alliances. That was the case, among others, of the schools on the Zen tradition (the Rinzai and the Soto schools, for instance).

Jesuit missionaries living in Japan wrote and gave origin to a vast corpus of written and visual documents. This material allows us to have information, through these men lens and assessments, on the political, religious, social and cultural Japanese organization. The assemblage of this data was essential for the Jesuit’s missionary strategy and methods applied to this specific reality. The nature of the mission activity explains the reason why Jesuits, who often acted as interpreters and “in between” of Toyotomi’s and Tokugawa’s courts, gave noteworthy attention to local religious practices in their writings.

By means of perceiving differences between Buddhist and Shinto rituals, Shinto was often defined as the religion of the “simple people”, being consigned to a secondary range. On the contrary, Buddhist practices were associated to “people of discernment”. This fact led these missionaries to concentrate their comments in Buddhist rituals and traditions. Thus, they often describe Buddhist sects and reflect upon their ceremonies, such as the funeral rites and the celebration of the dead in public festivities.

The Jesuit presence in Japan has also left testimonies concerning Japanese society that are still essential for our understanding of early modern Japan and the shaping of Japanese tradition (painting, calligraphy, tea ceremony, grammar, lexicography, the art of war, etc). Furthermore, not only the Christian presence shaped Japanese practices, as the inverse is also true.

This project aims at promoting a comprehensive research on the way Southern Europeans (nanban-jin) and Japanese confronted each other, interacted and mutually experienced religious “otherness” through the study of the composite cultural heritage, mostly created in Japan, by both European and Japanese.

Through the analysis of sources almost never associated – manuscript and printed texts written in both European languages and Japanese, paintings, engravings, maps, ceramics – a new insight will be given to this important moment in global cultural history.

This multi-tiered approach will consent to better identify and understand the perceptions of Momoyama-Edo Japanese Buddhist civilization by Christian agents, as a result of the interactions between two rival forces.