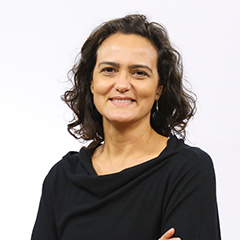 She is a Full researcher for CHAM-Centre for the Humanities at NOVA FCSH (Faculty of Social and Human Sciences of the Universidade Nova de Lisboa). She is head of the Heritage and Memory research thematic line and President of the Scientific Commission in the same centre. She is a guest lecturer in the History Department of FCSH NOVA in the Masters programs in e-learning History of Portuguese Empire, since 2015, and Heritage, since 2019. Since July 2020 she is also coordinator of the Masters Program in Heritage. With a Masters degree in History of Art of the early modern period (1997) and a Ph.D. in History of Art (specialization in Museology and Artistic Heritage, 2014), she leads the project VESTE (Dressing the court: costume, gender and identity(ies)) which focuses on the history and cultures of fashion during the early modern period in Portugal. Her research is cross -culture and -disciplinary engaged, calling for teamwork and different skills. Her areas of interest also encompass: Heritage studies as an interdisciplinary field of work that addresses methodologic, safeguarding, and societal challenges; the commission, production and use of artistic objects by women during the early modern period; the history and study of everyday objects entangling archaeology and visual resources; and the study of artistic relationships between Portugal and Portuguese India during the early modern period. Carla Alferes Pinto is also an active member of several networks and research projects, such as the UNESCO Chair on Oceans' Cultural Heritage (member of the scientific board), HPIP_Heritage of Portuguese Influence (Head of the Board until 2024), and H2020 RISE project CONCHA_The Construction of Early Modern Global Cities and Oceanic Networks in the Atlantic: An approach via Ocean' s Cultural Heritage (researcher and deputy leader of the work package 2_ The Immaterial Culture of the Ocean: Data Digging, Management and Preservation). She is also member of several professional organizations like ICOM, the Portuguese Association of Art Historians, The Association of Dress Historians, and the European Association of South Asian Studies.