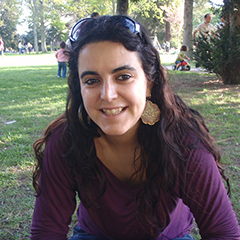 Isabel Gomes de Almeida has a PhD in History - Ancient History, by Universidade NOVA de Lisboa (2015), with a thesis entitled "The construction of Inanna/Ishtar in Mesopotamia: 4th - 2nd millennia BC". She has a a MA in History - specialization field in Ancient Civilizations of Asia and Middle East, and a BA in History, minor in Asian History, both by NOVA FCSH. She is an Assistant Professor of the History department at NOVA FCSH, where she teaches BA curricular units and MA seminars related to Ancient Civilizations, History of Religions of Ancient Asia and Ancient Silk Road. She is supervising PhD and MA dissertations on the same subjects. Since 2016 she is vice director of the Executive Committee of CHAM- Centre for Humanities, NOVA FCSH & UAc, where she also coordinates its Multimedia Area. In 2018, she integrated the Editorial Board of Res Anquititatis - Journal of Ancient History, 2nd series. Presently, her research revolves around History of Religions, namely in what concerns the syncretic processes in ancient religious systems, and the construction processes of divine figures. On another hand and giving her early experience as researcher of several projects related to the Early Modern Portuguese Expansion, she has been developing some work on the Reception of Antiquity by European Early Modern Agents.