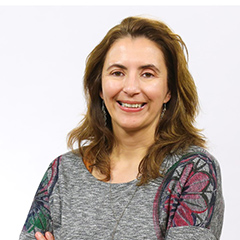 Cristina Brito is an Assistant Professor at the History Department at NOVA FCSH, Lisbon, and the Sub director of CHAM - Center for the Humanities (2020-2022). She is currently the co-PI of the ERC Synergy Grant 4-OCEANS (2021-2027) and the PI of two EEA Grants from the Bilateral Fund Initiatives. She holds a PhD in History - History of the Portuguese Discoveries and Expansion, Faculty of Social and Human Sciences of NOVA University of Lisbon (2005/2010), a Masters in Ethology from the Institute of Applied Psychology (1998/2000) and a Bachelors degree in Biology Applied to Animal Resources, Marine Resources, Faculty of Sciences of the University of Lisbon (1993/1998). Prior to her current positions, she has been awarded a Research Contract by FCT (IF/00610/2015) at CHAM (NOVA FCSH) to investigate "Cow-fish, ngulu-maza or iguaragua? Local and Global Knowledge Production, Changing Perceptions and Practices on Marine Animals in the Atlantic, 1419-1758" (2016-2019). Cristina Brito has an interdisciplinary, comparative and cross-cultural approach to her research. Her scientific interests include early modern marine environmental history, local and global perceptions about and uses of the seas, Atlantic and oceanic histories, humans and nonhumans relationships, and new perspectives on the environmental humanities. She is also a member of the Board of OPI - Oceans Past Initiative, and an active member of several networks and research projects within the thematic line of research (Environmental History and the Sea), such as the UNESCO Chair on Oceans "Cultural Heritage and the H2020" RISE project CONCHA.